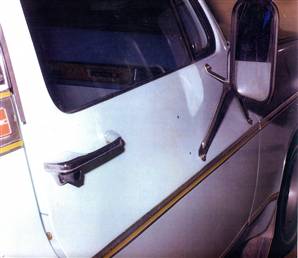 Barry Beach’s confession is repeatedly inconsistent with key physical evidence found at the scene of the murder and uncovered during the autopsy of the murder victim.

• Beach confessed he choked the victim. The autopsy revealed no indication of choking.

• Beach confessed he put the body in a garbage bag feet first and drug the bag along the ground to the river. No garbage bag shreds were found along the drag trail. No garbage bag, bloodstained or otherwise, was found at the crime scene or surrounding area.

• Beach confessed he held Kim Nees’ body by the shoulders and dragged her face-up from the area near the truck to the river. Dr. Pfaff, the Montana forensic pathologist opined that Kim Nees was probably dragged feet first based on bruising to her shoulders and other physical evidence.

• Beach confessed he threw the body off a cliff and down into the river and did not describe climbing down the cliff to drag the body to the river’s edge. However, the river’s edge is too far away according to the FBI crime scene analysis for a body to land in the water from the edge of this cliff. In fact, a footprint was found in the muddy riverbank near the body, a footprint that did not match Barry Beach. The body was found floating in the river a few feet from shore.

The state claims Beach’s confession shows knowledge of facts known only to the killer, specifically his description of the murder weapons. However, no murder weapons were ever found. The initial investigative theories regarding weapon(s) were based on autopsy results and were not conclusive. One theory was based on the victim’s father stating his truck was missing a crescent wrench.

Such theories were well known in the community following the murder. In fact, a display in a local hardware store soliciting information on the crime featured a crescent wrench. General facts such as the time and place of the murder, the victim’s truck found parked at the scene, the attack inside the truck, the body found in the river, and bludgeoning to the head as the cause of death were widely known in the community.

By their own testimony, the interrogating detectives invited Beach to speculate with them on how the murder took place. Beach incorrectly identified the victim’s clothing. Transcripts of phone conversations between the Roosevelt County sheriff and the Louisiana detectives indicate the detectives misunderstood facts about the clothing. These erroneous facts match details contained in Beach’s confession, suggesting contamination of the confession by the interrogating detectives.